Science fiction is one of those genres that lets the reader’s imagination take off. Through science fiction we get to explore new worlds or alien races, or our own world in the future. We get to consider the impact of actual or imagined science on society or individuals. And through some books, like A. K. Frailey’s, we get to look deeply at our own human nature.

I am happy to take part in the blog tour for A. K. Frailey’s science fiction Last of Her Kind.  And I look forward to the release of the next in her Newearth series, Justine Awakens. 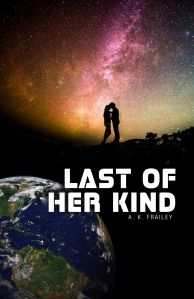 Anne Smith faces the end of one human era and the beginning of an alien alliance—united but unique in Last of Her Kind. A new future unfolds as Oldearth passes into obscurity, but the seeds of Newearth are planted. The human family faces a new horizon….

As a prelude to the Newearth series, Last of Her Kind sets the stage for an inter-alien alliance, which must learn to value human beings as more than throwaway tools. Cerulean’s admiration for Anne evolves into an extraterrestrial high road—offering the universe true humanity.

“This is a creative, thought-provoking, and visual science fiction. All the characters are well-developed with unique personalities, but my favorite is Cerulean, the “casual but dignified” guardian-alien, who develops strong feelings for humanity and for his charge, Anne. I love how the story unfolds and delves into human nature, exploring the possibilities of where humanity could end up, shown both through human characters and the eyes of Luxonian aliens.”                  ~Theresa Linden

“With her latest journey, Last of Her Kind, I’m reminded of why I love her style. It’s fresh and new. I like the direction she takes in this new SciFi universe.”  ~Josh Beckman

“Last of Her Kind is an inspiring triumph of faith and perseverance in the shadow of the impending apocalypse. Frailey’s emotionally captivating writing reminds the reader what it means to be human.”  ~TheNickofTime

In silence, Earth turned on its axis, a sharp contrast to the bustling reality on the surface. A hidden mind slipped past the blue and white sphere. His interest focused on Lux, a world of light beings, luminous in the reflection of their own glory.

“It’s like Sunday night. Remember, when you were a child and vacation ended? School on Monday was staring you straight in the face, and you had to get to bed. You wondered, ‘Did I waste it? Did I waste my chance?’ But nothing you did could keep Monday from coming.”

Learn more about author A.K. Frailey and check out her work!