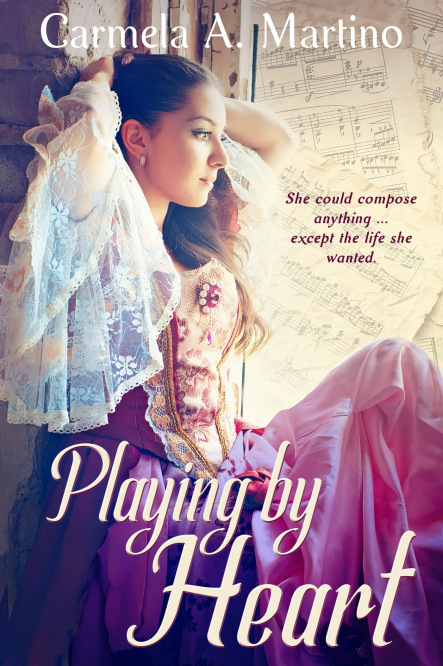 Emilia Salvini dreams of marrying a man who loves music as she does. But in 18th-century Milan, being the “second sister” means she’ll likely be sent to a convent instead. Emilia’s only hope is to prove her musical talents crucial to her father’s quest for nobility. First, though, she must win over her music tutor, who disdains her simply for being a girl. Too late, Emilia realizes that her success could threaten not only her dreams for her future but her sister’s very life.

Playing by Heart is inspired by two amazing sisters who were far ahead of their time—one a mathematician and the other a composer. At its core, the novel is the story of two teens struggling to follow their true calling, even when it conflicts with their father’s goals. It’s a clean historical romance suitable for ages 12 and up.

I am so happy that author, Carmela Martino was willing to share a bit about her new release. Please enjoy this author interview:

I love the amazing setting details in Playing by Heart. Did you go to Milan to do your research? If not, how did you create such realistic and lovely details?

I have been to Milan only once in my life, long before I decided to write Playing by Heart. As a result, the research for this story almost did me in! I’m a stickler for detail and if I couldn’t verify some aspect of the story, I wouldn’t include it. Even though it’s a work of fiction, I wanted the details to be true to the time and place.

For the events of the story, I relied heavily on the research materials I found about the two Milanese women who were my inspiration: Maria Gaetana Agnesi, a child language prodigy who later wrote an acclaimed math textbook, and her younger sister, Maria Teresa Agnesi, who was one of the first Italian women to compose a serious opera. But the biographical information I found gave me few setting details.

So, I looked for primary documents describing what life was like in Milan during the early 1700s. One of my greatest research finds was an account by someone who had witnessed Archduchess Maria Theresa’s visit to Milan in 1739. The document had been scanned into the Beinecke Rare Book and Manuscript Library at Yale. I was able to download and print the pertinent pages. The document gave me wonderful details that I incorporated into my novel, such as the description of the crowds that lined the streets waiting to greet the archduchess and how she participated in the Ritual of the Holy Nail.

Can you tell us more about the Ritual of the Holy Nail? Is it still performed in Milan?

While researching Milan’s history, I learned that the Cathedral of Milan houses a holy relic purported to be one of the nails used to crucify Christ. I’d had no idea the relic even existed. It’s housed inside a crystal case set in the center of an enormous gold cross that’s suspended high inside the cathedral’s dome. The cross can only be reached by means of a mechanical, cloud-shaped lift called the Nivola, which was supposedly designed by Leonardo da Vinci himself.

Yes, the ritual of removing the Holy Nail from its place high within the dome is still performed annually in Milan. The tradition began in 1576, when Saint Charles Borromeo, then archbishop of Milan, carried the relic in procession during an outbreak of the plague. Originally, the ritual was conducted on May third, the Feast of the Finding of the Holy Cross in the old liturgical calendar. At some point, the date was changed to September 14, the Feast of the Exaltation of the Holy Cross. There are numerous videos on YouTube depicting the event—they were a huge help to my research. Click here to watch a brief one narrated in English. And click here for one that is a bit longer, but narrated in Italian.

You mention in the Author’s Note to Playing by Heart that you couldn’t find any book-length biographies of composer Maria Teresa Agnesi, only ones about her older sister. How then did you research her life?

Yes, that was a difficult challenge. Maria Teresa is mentioned briefly in the biographies of her sister, but that wasn’t much to go on. While investigating possible sources, I found an analysis of one of her compositions in a book of essays on Italian music of the 17th and 18th century. The article’s author, Professor Robert L. Kendrick, had also co-written an entry about Maria Teresa in an encyclopedia of music. With a little digging, I learned that he was a professor of music at the University of Chicago. He was kind enough to answer many of my questions about what Maria Theresa’s life had been like and to also point me in the direction of additional research resources.

Even though there are book-length biographies of the older sister, Maria Gaetana, you say in your Author’s Note that there are still many myths surrounding her and her family. Can you elaborate?

Gladly! First, some background. Playing by Heart grew out of my research for a nonfiction biography of mathematician Maria Gaetana Agnesi for young readers; The only published biographies about her are for adults. I first came across Agnesi’s name in an article about little-known women of note. Even though I have an undergraduate degree in Mathematics and Computer Science, I’d never heard of her before. But when I started to research her, I kept finding conflicting information, both in books and online. For example, some references said that Agnesi wasn’t allowed to enter the convent as she wished because after her mother died she was left in charge of the household and the care of her twenty siblings. In actuality, Agnesi was 13 when her mother died and she had only six siblings at the time. Maria Gaetana may have helped out with those siblings for a while, until her father remarried less than two years later. The reasons for her not entering a convent had nothing to do with her mother’s death. Interestingly, it is true that she was the eldest of 21 children—her father married a third time after his second wife died. But many of her siblings died young.

I encountered so many myths about the Agnesi family that I created a website to dispel some of them. You can read more at www.mgagnesi.com .

How did writing Playing by Heart compare to working on your first novel, Rosa, Sola?

The process for the two novels couldn’t have been more different. My middle-grade novel, Rosa, Sola, began as a short story I wrote as an exercise while I was working on my MFA in Writing for Children and Young Adults at Vermont College. The exercise was to write a story based on an event from my own childhood that still evoked strong emotion in me. The emotion I wrote about was the fear I felt at age ten when I thought my mother might die. I called the short story “Rosa’s Prayer.” The feedback I received from classmates and instructors encouraged me to expand that short story into a novel that was eventually published by Candlewick Press.

I have to say, it was much easier to write a novel set during my own lifetime than one set two centuries earlier. For Rosa, Sola, I still had to research some of the setting details, such as the popular songs of the time, to make sure I got them right. That was easy compared to the extensive research I had to do for Playing by Heart. Still, it was an amazing experience. I’m thrilled to see all my work finally come to fruition.

As you can read in my review, I thoroughly enjoyed this story. And I am glad that you shared this fascinating background information with us. Thank you!

Thanks so much for hosting this interview, Theresa. I hope your readers will visit the other stops on the Playing by Heart Blog Tour. I invite them to go to my website for the complete list of tour links and enter for a chance to win a copy of the novel:

I’ll also be hosting a Facebook Launch Party on Tuesday, Oct. 17, 7-9 p.m. Central Time, where readers can win not only copies of Playing by Heart but other great books and prizes.

Filled with beautiful scenes and heart-wrenching moments, PLAYING BY HEART by Carmela Martino is an absorbing story of perseverance, the pursuit of excellence, and of sacrificial love.

This story shows the dreams and trials of two talented sisters. Emilia excels in music. But her father’s and the maestro’s attitudes lead her to feel inadequate. So she finds herself envious of the praise and attention given to her older sister. Maria, the older sister, is humble and faith-filled. And while she loves studying languages and philosophy, she longs to enter religious life and serve the poor. But this is an age where the father chooses the vocation of his children. Emilia and Maria’s father, driven to gain the title and status of a nobleman, makes choices that move him closer to his goals but farther from theirs.

The characters were inspired by two historical sisters who lived in the eighteenth century, so I appreciate the author’s faithfulness to research and time-period details. The engaging prose brings the scenes to life in full color! I especially loved how the descriptions took me into the heart and mind of Emilia, a talented young musician who “heard music everywhere—in the whispering of the wind and the rustling of the trees.” I also appreciated the way faith is weaved into the story.

For more early response to Playing by Heart, click here.

Carmela Martino is an author, speaker, and writing teacher. She wrote the middle-grade novel, Rosa, Sola (Candlewick Press), while working on her MFA in Writing for Children and Young Adults at Vermont College. The novel was a Booklist “Top Ten First Novel for Youth” and received a Catholic Press Association Book Award in the “Children’s Books” category. Her second novel, the young adult historical romance Playing by Heart, will be released by Vinspire Publishing September 30, 2017. The novel took first place in the Young Adult category of the 2013 Windy City RWA Four Seasons Romance Writing Contest. Carmela’s credits for teens and tweens also include short stories and poems in magazines and anthologies. Her articles for adults have appeared in such publications as the Chicago Tribune, Catholic Parent, and multiple editions of the Children’s Writer’s and Illustrator’s Market. Carmela has taught writing workshops for children and adults since 1998, and she blogs about teaching and writing at TeachingAuthors.com.

2 thoughts on “New YA book: Playing by Heart”